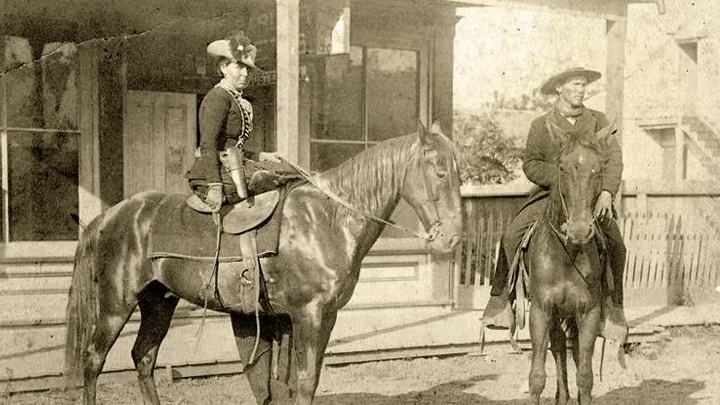 The Old West was truly an interesting thing to learn about, like a saloon, robbery, shootout, and outlaw, especially the stories behind vintage photos. They are fascinating to look at and dig into the never-ending tales it has to tell.

William “Tulsa Jack” Blake became a member of the Wild Bunch. Before being an outlaw, he was a cowboy in Kansas. Like the other members, he chose to join the gang to earn easy money. However, during a heated pursuit, he failed to escape and met his death.

Ben Kilpatrick with Hobek  Ben was very persistent in his way of life. After being jailed for years due to a failed train robbery, he went back to robbing trains again when he was released. However, what awaited them was not a good harvest. Since an agent outsmarted them, resulting in their deaths.

Bob and Grat Dalton. Bob and Grat first served as Deputy marshals before turning into Outlaws. It was just that the Dalton brothers attempted to rob Coffeyville Bank to prove their skills. However, by the time they were about to escape. The townspeople blocked their route, so the lawmen got them cornered in a bloody shootout. This photo of them was then taken, and the end for Dalton Gang.

Bill Doolin was suspected to be the last member of the Dalton Gang who got wiped out in the Coffeyville Bank incident. There were accounts that he was the one who tended the gang’s horses in an alley nearby. But his luck couldn’t keep up, and later on, he got brutally killed

John Shaw tried robbing a saloon owned by a Lawmen in Winslow. However, he thought it would be an easy task but it became his last. As soon as the lawmen knew about it, he was pursued and got killed during the Canyon Diablo Shootout.

John Wesley Hardin was a controversial outlaw and was the undisputed bloodiest gunslinger in the Old West. He got his first kill at a young age, which continued to increase and he claimed that it reached 40 deaths under his guns. However, he got killed shortly after his sentence in prison.

George Newcomb, death was far too awful compared to others. Since the very people who were able to put an end to this elusive Outlaw. The brothers of the woman he had a relation with, Rose Dunn had even treated his wounds before dying in the hands of the Dunn Brothers.

Bill Dalton was notoriously known for co-founding the Doolin’s Wild Bunch in Oklahoma. However, despite being known as an Outlaw. Did you know that he and his brothers were all bunches of Wealthy People? Bill himself was a successful businessman who even owned the biggest ranch in his town. Sadly, this photo showed that he died in their failed robbery. Which was rumored to be motivated by his and his deceased brother’s dream, the Dalton Gang, to be the Greatest Outlaws of the Old West.