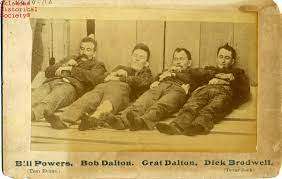 The start and end of the Infamous Dalton Gang was the ill fated Coffeyville bank robbery. But before that, the Dalton Gang has been successful to the series of bank robberies. This would be an interesting and exciting story that you need to know.

The Dalton brothers has A well off and big family but their father soon need to sell their house and that made the brothers drift away from a peaceful life. The sudden twist of fate of Bob Dalton and his brother Grat who was then deputy marshals started when their older brother Frank died. That made them turned as outlaws. Frank stood as a father figure to his brothers since their father died early. Frank was a distinguished Deputy marshal, If he did not died, the brothers could have not been turned outlaws.

Bob, Grat and Emmet Dalton and two other, Tom and Jake Moore met outside Tulsa. That time, they needed money and they want to out number James’ Gang record for robbery. They tried robbing two banks at the same time. They successfully got $25,000 however the townspeople noticed them and they had prepared an ambush for the group. Four members of the group were killed. Emmet had a chance to escape, but he saw his injured brother Bob so he went back riding a horse to help him. Four of the Coffeyville Citizens were dead on that shootout too.

Coffeyville bank robbery was a very tragic period for the Dalton brothers. Emmet Dalton survived after getting 23 gunshot wounds, but not for his two brothers. Coffeyville failed robbery has always been his biggest regret. He continued with his life and after being paroled, Emmet had a passion for writing books. “Beyond the Law” is a book he wrote and he wrote this in honor of his brothers. He reminisced about their adventures, he always wished that his brothers lived longer.