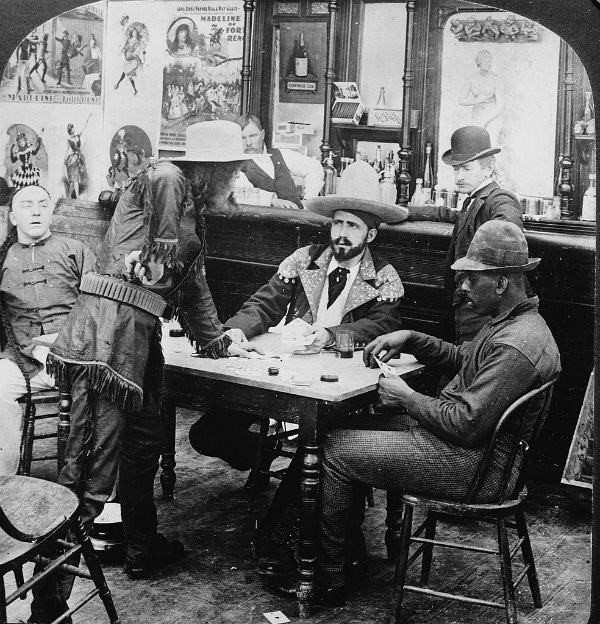 Without a doubt, gambling was the number one entertainment in the Old West, since everyone was crazy about it from cowboys, businessmen, lumberjacks, lawmen, and outlaws, everyone played it for fun and profit. So whenever there was a new settlement, businessmen would establish a gambling hall.

California Gold Rush was the unmatched immigration for gamblers in the West. In just a matter of time, San Francisco became a gambling hotspot. Famous gambling houses were built all over the place, such as one in Portsmouth Square and more. Gambling also flourished in nearby mining camps on the route passing through Panama and California. known as the “Gambler’s Route.”

Gambling houses were everywhere. Because of the railroads and cattle industries, many more individuals gathered to join the gambling craze as they had plenty of cash to wager. It was common that when you join different kinds of people in a gambling house, trouble arises. Most reputable frontier gamblers were tall, well-groomed gentlemen, wearing black tailored suits. They look calm but when they are crossed they can kill anyone.

It was typical that men are the prominent gamblers, like Billy the Kid, Pat Garrett, Doc Holliday, Wild Bill Hickok, and Wyatt Earp. But women also placed their bets and played cards. One, in particular, was Madame Mustache, who played, dealt Faro, and even owned her own gambling house. Poker Alice and Kitty Leroy were also excellent gamblers, not just that, they also have no fear of shooting pesky men.

Most gamblers are fond of past faced games for them to have faster profits in their pocket. Faro was like the king of all gambling games. Many played Three-card-Monte, Roulette, Chuck-a-luck, and so on.

A slow-paced game like poker gained popularity as it became associated with such events as Hickok’s Deadman’s Hand. There were gambling outside saloon and gambling halls like horse racing and cockfighting.

Gambling in the Old West became a part of history so people can be distracted from the rough and tumble life on the frontier. To begin with, they already took the risk and gambled their lives when they started heading west for a better opportunity. Frontier people became in love with the thrill and excitement of putting everything in the line for the sake of even the slightest chance of profit, but, of course, thru gambling.